“Before I found out I was pregnant, I had always wanted a baby, because I wanted someone to love me,” says UCAN alumni Charlestein (Charlie) Dantzler. “My mom claimed she was in the Department of Child and Family Services (DCFS) system, she said her mom was in DCFS, and then (my sisters and I) were in DCFS, and I’m like, okay, the cycle stops. I refuse for my baby to go through anything that I went through. So I do the best that I can, I really do.”

Charlie came to UCAN in 2011 as a DCFS client. She had been a youth in care for her entire life, and was matched to our Transitional Living Program. The program has nine live-in locations in Chicago, working to prepare youth for emancipation (formally leaving DCFS care) by offering a supervised and structured setting to enhance their skills in developing healthy, supporting relationships and reaching self-sufficiency.

Charlie had just graduated high school when she found out she was pregnant. Prestina Singleton became her Parenting Worker.

Prestina is a former UCAN Teen Parent client who resided in the Independent Living Arrangement Program (ILA). She has held different positions during her time at UCAN: Respite Worker, Family Development Specialist, Location Monitor and is currently the Alumni Service Manager. 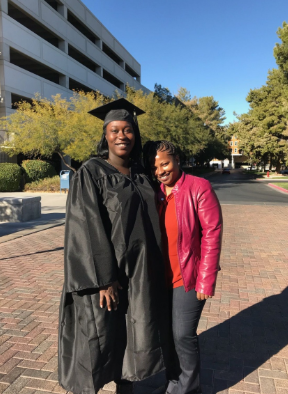 “When I had met Charlie she had met a whole bunch of people in her life,” Prestina explains. “She was a little

standoffish at first, she didn’t know which direction the relationship was going to go. Once you’ve been in the system, and you meet all these different people, it’s like, ‘Oh my god, it’s another worker and I have to tell my story.’ But I didn’t approach the situation that way. I wanted to know who she was at that point and where she was, what her plans for the future were, and to help her with the baby. I helped her learn different things about parenting. I introduced her to my own children. I shared with her that I was also a former DCFS Parenti

ng Teen client and I think our relationship grew from there, because she knew I was a former client.”

Charlie was able to trust Prestina and bond with her over their shared experiences. “She knew exactly what I was going through, not just as someone who has heard the story. I spent my first Mother’s Day with her and it was the best,” she says.

That year, after Charlie gave birth to her daughter Leslie, she and Prestina spent her first Mother’s Day together, along with both of their kids, and Prestina’s best friend, who is also her former parenting worker from when she was a youth at UCAN.

“I wanted to give something to [Charlie] that was given to me,” explains Prestina. “Yeah, we both had children at a young age and we didn’t really have a lot of family or support, so I wanted to be that support for her. I had that support from my former parenting worker when I was at UCAN, and we became best friends over the years, and I wanted that same thing for Charlie, and all of my girls.”

“Prestina helped with everything,” remembers Charlie. “Even help with homework, or with Leslie. If I had a question, she’d answer her phone in the middle of the night. Everything, still to this day. She is the only one I still talk to in terms of caseworkers or foster parents.”

Six months after Leslie was born, Charlie transferred to our Independent Living Arrangements, which is a youth’s last step to emancipation. It teaches youth skills such as money management, household management, health, legal rights, personal responsibility and social responsibility.

After her emancipation, Charlie moved to Las Vegas with her daughter. There, she got a job and continued her education in the medical field. “None of my family came out to my graduation [in Las Vegas]. I was the first one to finish college. Prestina was the only one who came. It really brought me to tears.”

Today, Charlie works at a jail as a medical assistant. Leslie, now six, is heading to second grade. Her favorite part of school is lunch.

“I’ve got two more things I want to do,” Charlie says. “I want to become a police officer and become a foster parent. That’s something I’ve always wanted to do since I was young. I’ve been in DCFS my entire life. I want to do something different: I want to take in teenagers.”

“I wanted to show her the right way to succeed,” says Prestina. “And she did it, and I am very proud of her.”

As manager of UCAN’s Alumni Services Program (ASP), Prestina stays in touch with many youth who have emancipated. The innovative, voluntary program offers additional support to young adults who have exited any UCAN program. ASP provides short-term case management services utilizing a team of professionals that includes a case manager, housing coordinator, employment specialist, and access to the Alumni Association. ASP assists young adults in securing safe and affordable housing, preparing for and gaining stable employment, accessing dependable child care, addressing emotional issues through counseling, support and referrals for substance abuse treatment, and learning life skills. A key component is teaching young adults how to independently identify and access community resources in the future. Charlie is a living example of the power of learning self-sufficiency while still having a support system.