Home » About Us » What We Do » Advocacy » UCAN youth visit Springfield 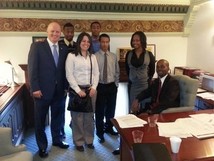 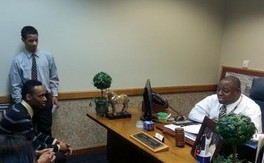 This spring, UCAN youth visited Springfield to meet with elected officials. UCAN believes strongly in providing youth a voice to advocate for themselves and their peers. Further, visits such as these allow youth to see our government in action, while elected officials get the opportunity to meet the youth whom their policies affect.

UCAN first met with Senator Dan Kotowski, who formerly held the position of UCAN’s Chief Development Officer. Youth spoke about how UCAN has impacted their lives, and why programs such as UCAN’s Youth Ambassador program and Project Visible Man (PVM) are important. UCAN client Yeremey Pimental, age 21, shared that, “I actually rearranged my work schedule so I that I am available on Wednesdays to attend PVM meetings. I attend because I am able to express myself and I know there will always be people there who care about me.”

UCAN staff ambassadors chaperoned the youth on this trip, and spoke about their role at UCAN. Transitional Living Program Coordinator Emily Baron said that, “It was a very comfortable atmosphere, which was great for our youth. The fact is that some of our youth are used to such a small confined world, and a three hour drive to Springfield to meet elected officials can be a significant event.”

UCAN also met with Senator Patricia Van Pelt Watkins’s staff; her district includes UCAN’s Damen office and the area of North Lawndale where UCAN’s new CITY campus will be built. Yeremey explained that CITY will be important for North Lawndale youth in the same way that UCAN has changed his life. “Right now I would be hustling on the streets. Because of UCAN, I learned that there is a better way to make money. Before, I trusted the streets rather than the job, and now my life has changed completely.”

The group also met with Senator Emil Jones, whose district houses the Chicago Housing Authority’s Lowden Homes development, where UCAN serves residents via its FamilyWorks program. UCAN Employment Specialist Jhada Shelton reported that, “We talked about FamilyWorks and how counseling and youth mentoring can make a difference to a youth who has suffered trauma. I was surprised at how open and ready the elected officials were to sit down and talk with us. With both staff and clients present, elected officials were given the opportunity to see UCAN at work.”