Generously funded by The Joyce Foundation, UCAN’s national survey (which has been running for more than a decade) indicated some fairly disturbing trends about youth fears, experiences and attitudes toward gun violence. A comparison of survey results from May 2009 to January 2012 showed that: Teens are finding it increasingly easy to obtain a handgun, with a dramatic 30% rate of increase among all teens and a shocking 62% increase among African-American youth. The percentage of teens reporting that they could get a handgun if they really wanted to increased by a rate of 29% (from 34% to 44%). This represented a rate of increase among Caucasians of 30% (from 33% to 43%), among African-Americans of 62% (from 29% to 47%) and among Hispanics by 14% (from 35% to 40%).

Bryan James, 19, a UCAN youth told his story, “I was walking home, and all of a sudden shots were fired. My first natural reaction was to start running. As I began to run, I heard more shots, and then I felt a bullet rip through my leg. Once I made it to safety, I was simply happy to be alive. Here’s what I don’t get: I am not affiliated with gangs. I am a youth leader in my community, and enrolled in college. How could something like this happen to me? Are any of us safe?”
Commissioner Robert Steele

“The results from the survey are disturbing, especially considering how gun violence disproportionately impacts our community,” said Cook County Commissioner Robert Steele. “It is our hope that the results of this survey help to shed light on this problem and encourage everyone to take action, because it is our moral obligation to keep kids safe. I commend UCAN and the young leaders with whom they work for their efforts in creating a life free of gun violence for our youth.”
The survey also indicated that 74% of teens nationwide think that adults should not carry loaded handguns in public places, 64% believe that government officials are not doing enough to create common sense gun laws and more than one in three teens fear being shot someday. Several young people who have experienced gun violence and who now participate in programs that UCAN operates including Project Visible Man, a group mentoring program for young men of color, and Hands Without Guns, classroom-based anti-violence programming in Chicago Public Schools, participated in a listening session after the press conference to discuss the survey.
The following documents are also available to download:
2012 Teen Gun Survey Press Release
Full results of the 2012 Teen Gun Survey
Full results of the 2010 Teen Gun Survey
Full results of the 2009 Teen Gun Survey

Survey methodology
UCAN’s annual Teen Gun Survey is conducted by Teenage Research Unlimited with a nationally representative sampling of 600 teens ages 13-18 and a +/-3 percent margin of error. Quotes were set to ensure equal distribution by gender, age, and region, as well as to ensure representative samples of African-Americans and Hispanics. Each interview was approximately 10 minutes in length. 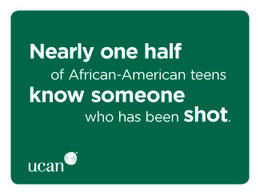 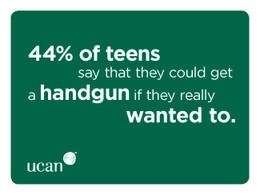 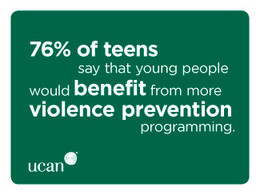